Four of the most memorable AFL Grand Finals of all time

The AFL grand final breaks television rating records year after year, with good reason. It’s the most heart-stopping, chip dipping, beer sipping, edge of your seat sporting event of the year. Whilst it originated in Victoria, the AFL is now a truly national sport. Many of you NSW betting fans might still prefer NRL, but no sport in Australia is more watched and loved than AFL football, so when it comes time to grand finale of the footy season, nothing quite matches the AFL grand final.

While every grand final is memorable in its own right, some matches remain unforgettable, no matter who you support. We’ve nominated our top four grand final matches – let us know if you don’t see your favourite!

While technically the AFL was still known as the VFL at this point in time, it just wouldn’t feel right to exclude this historic grand final from the list. Widely regarded as the best grand final of all time, the Carlton vs Collingwood game still holds the record for the largest crowd to ever attend a footy game in the history of the sport, an incredible 121,696 spectators were lucky enough to witness it.

The conditions were perfect – a huge, noisy crowd looked on as two arch rivals went head-to-head. At half time, Collingwood led by 44 points, seemingly leaving Carlton in the dust. However, in what would prove to be an unbelievable comeback, Carlton not only clawed its way back, but went on to defeat Collingwood by 10 points in a stunning turn-around, winning 17.9.111 (17 goals, 9 points) to 14.17.101 (14 goals, 17 points).

Some might remember the match for the image of Carlton’s Alex Jesaulenko leaping up so high that his knees touched Collingwood’s Graham Jenkin’s shoulders. The feat is often described as “The Mark of the Century”. A record crowd, a pulsating comeback and so many iconic moments, it’s easy to see why the 1970 grand final has cemented its place in football history as one of the best matches of all time. 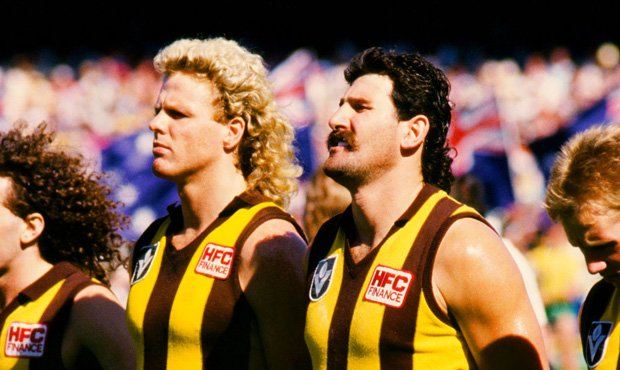 The 1989 Grand Final was one of the most intense matches the sport has ever seen. There were bone-jarring hits, broken bones and spectacular marks. Perhaps the most memorable moment, was when Geelong player Mark Yeates charged at Hawthorn’s Dermott Brereton, striking him with enough force to break several of his ribs and injure one of his kidneys. But in an unbelievable show of determination, the battered Brereton did not leave the field – he wound up staying in the game and scoring three incredible goals. DiPierdomenico, who won the 1986 Brownlow Medal, also played out the game with broken ribs and a punctured lung and was later hospitalised for 8 days.

Broken ribs, concussions, and punctured lungs were just a few of the injuries sustained during one of the grittiest finals in history. All of Australia watched on in morbid fascination to see Hawthorn take a narrow victory of 21.18.144 to 21.12.138 and a certain Gary Ablett kick 9 goals in a losing side.

Lightning doesn’t strike twice, but amazing grand finals can strike back-to-back. This is one for the Collingwood fans, lovers of underdog stories and hard nosed footy. In 1990, Collingwood hadn’t won a grand final in 32 years, and with Essendon’s strong start it was beginning to look like the drought would extend to its 33rd year.

The most memorable moment of the match wasn’t a kick, catch or a score, but rather a huge brawl that broke out on the field as the first quarter came to an end. The end of quarter siren signalled the ding of a boxing bell, as players ran to jump on each other in a pile-up the likes of which Australian sport had never seen. While only one minor injury was actually sustained by the players involved, it’s still one of the most talked-about fights in AFL history.

The kerfuffle seemed to give Collingwood a renewed energy, as the club would make a vigorous comeback in the ensuing quarters. Collingwood’s captain Tony Shaw would be remembered as the best player the match, carrying the club to a long-awaited, hard earned victory, with a final score of 13.11.89 to 5.11.41

If you like close, edge of your seat matches that are a toss-up until the last second, it’s hard to go past the 2012 AFL grand final. No one likes a game of footy where they know who’s going to win within the first five minutes, and this was certainly not that kind of match.

In a great back and forth contest, Hawthorn led in the first quarter, Sydney in the second and third, and then Hawthorn again at the start of the final term. In an unbelievable nail-biting finish, Sydney managed to score a match-winning goal with less than a minute to go, ending the match in front 14.7.91 91 to 11.15.81. It was like something out of a movie, except no script was required to create this unforgettable match.

What is the most memorable grand final that you’ve seen? Maybe it was the first one you watched as a kid, the year your favourite club won, or when the match was so close in the final quarter that you were on the edge of your seat until the very last moment. Let us know your all-time favourite AFL grand final!