After losing his semi final match to Novak Djokovic at the 2021 event, Rafael Nadal’s French Open overall win loss record stands at 105 wins and 3 losses. Nadal claimed his 13th title when he won the 2020 French Open. Rafa won his first French Open title as a 19 year old back in 2005. He has since racked up a further 12 French Open titles, including the 2020 championship. 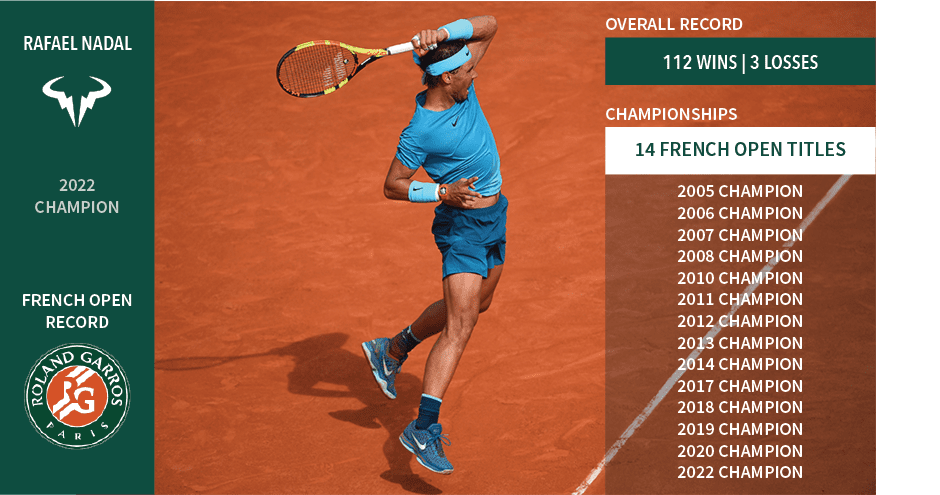 Rafael Nadal has won 105 matches at the French Open and suffered only three losses.

Players to beat Nadal at the French Open

The two players to defeat Nadal at the French Open are Swede Robin Soderling in the 4th Round of the 2009 Open and Novak Djokovic in 2015 Quarter finals and the 2021 Semi finals. Nadal withdrew from the 2016 championship with a wrist injury before his 3rd round match against fellow Spaniard Marcel Granollers.

For the record, Soderling took all before him at the 2009 French Open, only succumbing to all-time great Federer in the final. When he defeated Nadal in the 4th round, it was Nadal’s first loss at Roland Garros after 31 consecutive victories. Indeed, it was his first loss on clay in best of 5 set tennis. It has been speculated that Nadal was affected by injury during the 2009 campaign.

Serbian Novak Djokovic is the only the second player to defeat Nadal at the French Open. The result was far less of a surprise than it was when Soderling beat Nadal, Djokovic even entering the match as favourite. Nadal had been struggling in his return to competitive tennis after several injuries. Djokovic went on to win the 2015 title, completing a career grand slam.

It came as no surprise that Australian betting sites listed a fit Nadal as the raging $1.90 favourite for the 2019 French Open. Despite a clay court lead up campaign that only yielded one tournament victory, it was the Clay Court King’s victory over Djokovic in Madrid that led to his favouritism. In a tournament where the top four seeds made it through to the semi finals, we were treated to another Federer vs Nadal encounter in the Semi Finals. Despite blustery conditions, Nadal comfortably accounted for Federer in straight sets before meeting 2018 finalise Thiem in the final. Nadal grabbed the first set before Thiem came back with the second set. The loss of the second set seem to lift Nadal to yet another level as he went on to win 16 of the next 17 points and win the final two sets 6-1 apiece.