Brownlow Medal history and past winners

The Brownlow Medal is the highest individual honour awarded in the Australian Football League (AFL). The medal is awarded to the “best and fairest” player in the competition, and is one of the highlights of AFL Grand Final week.

Also known as the Charles Brownlow Trophy, the medal was named in honour of Charles Brownlow by (what was then known as) the Victorian Football League (VFL). Charles Brownlow was an esteemed Geelong Football Club player, club secretary, and VFL president. In 1924 Brownlow passed away following a prolonged illness; that same year, the VFL created the medal in his honour. The medal has been awarded every year since 1924, except for a brief break from 1942-1945 due to World War II. The blue and gold medal with bold text stating “CHAS BROWNLOW TROPHY” is instantly recognisable, and has remained almost the same in shape, size, and design since its creation, except for the change in monogram from VFL to AFL in 1990. The 2019 ceremony will make it the 105th time that “Charlie” has been awarded.

The winner of the Brownlow Medal is determined by votes cast by the officiating field umpires after each home and away game. Votes are awarded on a 3, 2, 1 points voting system, where the best afield receives the maximum 3 votes, the runner up 2 votes, and the third most effective player 1 vote.

Prior to 1980, if two or more players tied for the medal, then only one player was awarded the medal. Until 1930, a tie was disputed based on which player had played the least amount of games. After 1930, ties were disputed based on who had been awarded the most 3-vote games, and if it was still a tie, they would move on to who had won the most 2-vote games. In the case of Des Fothergill and Herbie Matthews however, who tied for the 1940’s medal, this nomination system was still unable to determine a winner. In this case, both players were awarded mock medals and the VFL kept the original.

In 1980, the voting system was amended so that if two or more players tied for the nomination then each player was awarded a medal. In 1989, medals were respectively awarded to the eight players who would have been eligible to receive medals according to the new system.

According to the spirit and qualifications for the Brownlow Medal, one of the most important attributes in players, and something the winners of this award must demonstrate above all else, is fair play. For this reason, any player who has been suspended during the regular season automatically becomes ineligible for the award, even if they earned the most votes. A player’s ineligibility is indisputable regardless of how many votes they receive. In 1997, for example, Chris Grant would have won the medal, having more votes than the winner of the award, Robert Harvey, but he was ineligible due to a one-match suspension.

The 2019 Brownlow Medal will take place at Melbourne’s Crown Palladium on Monday 23rd September. Correctly predicting the Brownlow winner is a source of pride amongst football fans, and it is commonplace to place a wager on the outcome of the event. We have published a comprehensive betting preview to the 2019 Brownlow Medal that factors in past performance, identifies patterns of previous winners and looks at the different markets available for those looking to place a bet on the night.

In pre-season markets, Dustin Martin, Nat Fyfe, Patrick Cripps and Geelong’s Patrick Dangerfield were all vying for favouritism. Not much has changed since! Martin is ineligible, but Dangerfield, Cripps and Fyfe are in the top few chances. At the time of writing PlayUp and Ladbrokes are both showing odds of $2.750 for Patrick Dangerfield to win this year’s medal. He is the shortest price of the favourites. 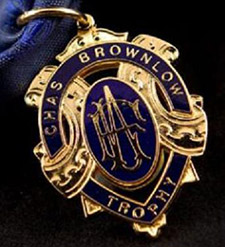