The T20 phenomenon rolls on in Australia. Cricket Australia’s Big Bash League is now entering its 11th season. What is known throughout the country as the ‘BBL’, the tournament originated back in 2011. It continues to grow in popularity. 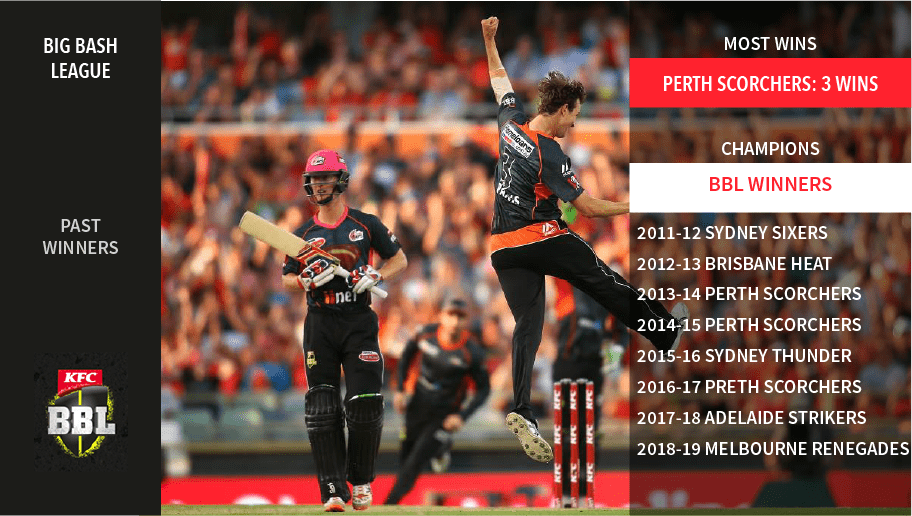 The Perth Scorchers and the Sydney Sixers have dominated the first 10 seasons of the BBL, with each team winning three times. Only two teams have not won the Big Bash T20 tournament: the Hobart Hurricanes and the Melbourne Stars. The Brisbane Heat, Melbourne Renegades, Adelaide Strikers and the Sydney Thunder have each won the tournament once.

Few cricket fans will forget a young David Warner announcing himself on the national stage by scoring the first-ever BBL century in just the second match. Warner scored an unbeaten 102 that day in front of a packed MCG crowd. In all, 20 centuries have been made in BBL history, with Craig Simmons being the only player to have scored two hundreds. The highest score ever made is 122 by D’Arcy Short.

Most sixes in BBL history

Chris Lynn stands alone when it comes to hitting the most sixes throughout BBL history. Lynn has hit an incredible 172 sixes in his 90 BBL matches to date. By way of comparison, Glenn Maxwell is second on the list with 97 sixes. In terms of strike rate of sixes per game, Chris Gayle is on top having amassed 51 sixes from his 22 appearances. Lynn is next followed closely by Alex Hales (70 from 47 matches). Source: Cricinfo.

Most betting sites typically frame markets around the number of sixes hit by a team during an innings. Typically, if your team hits eight sixes, this is a considered to be a lot.